The Gingerbread Houses website section has got a long awaited overhaul and a more modern and fresher look. The content is the same, you will find all the familiar links here.

Gingerbread Houses is part of the website Graphicality, a website dedicated to the hobby and interests of Helene U. Taylor. You will find the Main Page for Graphicality here with links to all the other sections – well worth a visit!

See the amazing creations made from the pattern you can download here, visitors have sent in their own photos over many years and it is incredible how many different versions possible to make. What will your version look like?
Visitor Page 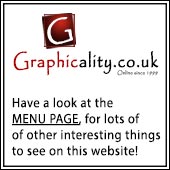 My Gingerbread Houses from 2002

In Norway, the tradition with gingerbread house is widespread, especially among families with children. The tradition says that the house should be ready for the ‘nisse’ (mythological Scandinavian creature, a mix of a garden gnome and an elf) to move in by ’Little Christmas Eve’ (23rd December). The nisse will have moved out again by New Year’s Eve, and the house can therefore be taken apart. In families where the children are quite young, the demolition job is usually taken care of by one of the parents. When the children are older, smashing the house to pieces with a hammer is often done by the children themselves, as part of the entertainment on New Year’s Eve. Most children also eat parts of the house and the sweets.

The gingerbread house tradition originally came from Germany, and spread through Sweden to Norway. The houses are traditionally formed as a one-room house or a log cabin, often with a light bulb inside and always elaborately decorated with loads of sweets. Some families choose to make a Christian variety, a gingerbread house shaped as a church. This is seriously mixing pagan and Christian traditions, as a church is no place for a nisse!

My gingerbread houses of 2002 started out as an idea of making something a bit grander than the average log cabin, more like a mansion of some sort. I had already decided to make two identical houses, and give one of them as a Christmas present to a Norwegian friend of mine also living in London. 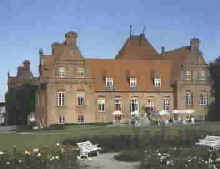 I found this picture on the Internet which gave me the basic idea for the house, and I then decided to make a drawing using Macromedia Flash. To see how the house would fit together, or not fit well together, I made the drawing using correct measurements and just scaled it up at a later stage. The two gingerbread houses are nearly identical, just minor differences in décor. House number 1 has not got chimneys, and house number 2 has tissue paper glued to the inside with icing sugar around the frames, which makes nicer looking windows.

Below are the two gingerbread houses I made in 2002, with rather basic decoration - click to see all 10 photos. See my visitor page for many different variations of my gingerbread mansion, some of them beautifully decorated.